Moving From Scare-City to The Abundance Forest 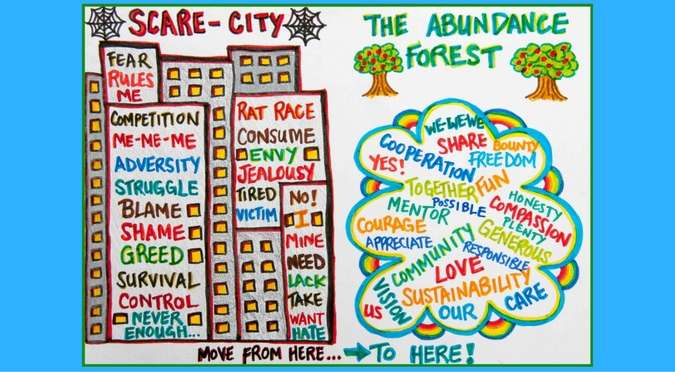 Does it ever strike you as strange that we live in a world that is inherently abundant, and yet we don’t believe that?

Look at the sun pumping out energy all day every day, showering our sparkling blue planet with its golden rays of abundance… its relentless energy flow is the very definition of ‘more than enough’.

The plants know about abundance. If they were left to their own devices they would cover our cities over in just a matter of years. The waves know about abundance, as their perpetual back and forth motion demonstrates. There is unlimited energy and potential on this planet.

And yet… that’s not what we tend to focus on. We focus on how there is not enough. We focus on fear, and how we believe that everything is going to run out. Our entire economic and political system is based on the management of scarce resources. We fight over these resources and through war, conflict and greed we create for ourselves a self-fulfilling prophecy where there is a strong illusion of ‘not enough’. And then we cry about it, or we get angry, or we blame it on others (pick one: the system, corruption, politicians, big corporations, the Illuminati).

I call this resulting state of being ‘Scare-City’ – it’s a place where we live in fear. It’s real, because we made it real. Our collective mindset of scarcity, which causes our collective actions, leads inexorably to this conclusion.

I recently interviewed Roger Hamilton, a well-known entrepreneur and futurist, for a film about abundance (called The Abundance Code) and one of the things he pointed out was this: we have enough, it’s just not being distributed. We have an abundance of knowledge and teachers but not enough education. We have an abundance of medicinal cures but healthcare is still one of our biggest issues. There is a huge amount of food being produced but we still have people starving. We have incredible wealth being generated, and yet it’s mainly flowing to the top 1 percent to make the super rich even super richer. So the problem is not supply, it’s distribution.

Scarcity is not something that’s inevitable, it’s something we are choosing to make our reality. Roger feels the problem lies in our level of consciousness. We have everything we need to solve 90% or more of the world’s problems, we just lack the evolved consciousness to be able to harness those resources and make it happen.

So how do we change that?

Albert Einstein once said “We can’t solve problems by using the same kind of thinking we used when we created them.”

There is a great spiritual truth hidden in those words. If we want to change our reality, we must first change our minds. We must change what we believe. Until we truly believe that abundance is our birth-right, that abundance is the natural way, and that scarcity is a just temporary aberration mainly brought about by the fear and short-sightedness of humans… how can we truly break free?

Let’s not worry about changing the world right now… not because we can’t do it, but because it can feel big and over-whelming. What can we each do right here, and right now, to start living abundantly? What do we have to offer?

Can we plant a tree that will give shade for generations to come?

Can we start growing veggies at a community garden?

Can we get to know our neighbours? Can we see if they need some food brought to them if they are sick?

Can we let that person who’s in a hurry go in line in front of us?

Can we give some comfort to someone who’s in pain?

Can we share a kind word, or even just a smile, with a stranger?

Through small acts like these we begin to recognise that we are not part of an ‘economy’ we are part of an ecology. We are not living in a ‘system’, we are living in an ecosystem. That rather than live in a state of constant fear in ‘Scare-City’ we can choose to live together, in the Abundance Forest.

When we look for the ways in which we can be abundant, right now, without making any other changes… we give permission for abundance to show up in our lives, and to be reflected back to us in myriad ways.

P.S. I’d love to hear from you… scroll down and leave a comment.

P.P.S. If you haven’t see The Abundance Code film yet, you can check out the first 10 minutes for free here

Julie Ann Cairns trained as an economist and financial market analyst, has over 25 years experience in the field of funds management and financial education, and is the author of the book The Abundance Code: How to Bust the 7 Money Myths for a Rich Life Now, published by Hay House. She is also the director of The Abundance Code documentary (2016) which explores through 15 powerful interviews with thought-leaders from around the world, how our world and our collective consciousness can make the paradigm shift from Scarcity thinking to an Abundance-based way of being. Our very survival may depend on it.