Unlocking The Gifts of The Past - The Abundance Code

Unlocking The Gifts of The Past 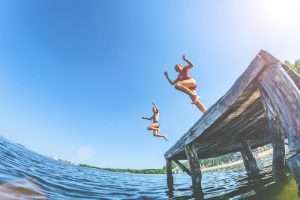 I’m easily confused by the question where are you from? And yet it’s a question that I’m asked often, because of my messed up hybrid ‘Canadian-Australian-I don’t know where’ accent.

I’m kind of a cultural mish-mash.

I was born in England, of Australian parents, and I’m the youngest of three children. I spent most of my childhood in Canada, most of my adolescence in Australia, half of my twenties studying in Japan, and a good chunk of my thirties travelling around Asia for business (Hong Kong, Singapore, Malaysia, Indonesia, Dubai).

I attended seven different schools, studied at three universities, I’ve travelled dozens of countries, had nine jobs, fourteen boyfriends, one failed marriage, and I’ve been involved in running multiple businesses. And, I’ve given birth to one beautiful daughter.

They both eventually reached ‘remarried-and-clawing-back-a-life-from-the-rubble’.

It sounds rather clichéd, but I’d have to say that the only constant in my life has been change.

I’ve learned to be adaptable, to be resilient, and I’ve had to heal some very deep emotional and psychological wounds.

I’ve had a lot of Grace in my healing processes over the years. One of the things I’m most grateful for is the fact that I did have a relatively stable and happy childhood up to about the age of 8 or 9. I feel like that gave me a solid foundation, and a source of resilience, to be able to handle what came after.

My Dad died recently, and that has triggered in me a lot of reflection and remembering of things past. I’m not usually one to dwell too much in the past, and I only like to do so in order to better understand the lessons I’ve learnt. But now, it seems like an appropriate time for those kinds of reflections. And with that reflection has come a deep sense of GRATITUDE.

So, if you will, let me tell you about the good years that my father and mother were able to give me growing up.

For most of my early childhood in the 1970s we lived in a large house in well-to-do suburb of a small town in central Ontario, Canada, about two hours north of Toronto. It was a two-storey white painted timber house with dark green window shutters.

My father was a specialist oral surgeon and anaesthesiologist; a short and sturdy man who was almost always at work. We didn’t see him much during those years. My mother was at that time a somewhat lonely and bored housewife who had formerly been a nurse. I think she missed having a career – Dad wouldn’t let her work. It was that era. Women’s liberation was kind of a new thing.

My parents both smoked (didn’t everyone in the seventies?) and they both liked to drink. A fair bit. Dad favoured smoking Old Port ‘cigarillos’ which were thin-ish cigars with white plastic tips that had been dipped in port, and he liked drinking cognac; while mum smoked her long thin tailor-mades accompanied by vodka and orange.

We had a golden retriever named Rex, a black and white cat named Buttons and a procession of other, more short-lived, pets: a bunny named Angel that got mauled by a neighbour’s dog; a wood-duck that choked on a piece of bread; and some hamsters that died after eating my bedroom curtains.

My first memory is from the age of 3. I was waiting out on the sidewalk outside our house for what seemed like hours (but was probably only ten or fifteen minutes) so I could be there to hug my sister when she got home from her first day of school. It was 1970, and the world was full of striped trousers and miniskirts – things one tends to notice at a height of three feet. My sister was 5, and my older brother was 8.

From the ages of 4 to 7, my life remained relatively simple and carefree. I played at my friend’s houses, went to gymnastics classes, took ballet lessons, played with my dolls and had tea parties.

My brother, sister and I spent hours climbing the assortment of huge weeping-willow trees that were dotted throughout the neighbourhood. We swam in our backyard pool in summer, and we skated on the frozen swimming pool in winter. In autumn, we raked up leaves into big piles and gleefully jumped into them from the lower branches of our maple tree (mostly gleefully, that is, except for that time we accidentally left the rake in the pile of leaves and my sister fell onto it and broke her ankle). I even remember running through meadows full of flowers in the spring sunshine. Idyllic.

There were rose-coloured days when the whole family packed up and went to the cottage in summer: we swam in the sparkling lake and thought nothing of the leeches (which Dad would burn off with his ever-lit cigarillo); we sped around in his prized Italian timber speedboat, and watched as my parents took turns water-skiing, or screamed in glee as we were dragged behind the boat on Styrofoam boards; and we fell into bed at night exhausted from so much fun, after eating our fill of Mum’s freshly baked blueberry pie.

I loved simple things: tinned spaghetti, applesauce, watching Sesame Street on TV, and playing dress-ups. I liked falling asleep snuggling the cat; and before bedtime I liked swinging around like a monkey on my canopy bed (an activity that caused its eventual collapse and demise).

I liked the little boy from my kindergarten class who used to invite me over to his house to play Lite-Brite. He was my first love… in a completely innocent way because we never even held hands! I was devastated when he moved away.

My parents sold our green-shuttered suburban house and the cottage to build their ‘dream’ home on the edge of a lake when I was 7. That was when life really began to change.

I guess that my father was making a lot of money. My parents certainly lived a lavish lifestyle. The new house was a mansion – not by Hollywood standards perhaps, but for semi-rural Ontario. It had four bedrooms, three bathrooms, an indoor swimming pool, a sauna and steam room, a gymnasium, two lounge rooms (upper and lower), a dining room, a breakfast “sun” room, a den, a bar, an indoor barbeque area, an outdoor barbeque area, a wrap around deck, grand stone open fireplaces and a kitchen that ended up being featured in some magazine. My parents were hobby pilots too, and they bought two airplanes – his and hers.

Our lives were beautiful and blessed.

That is, until my parents began to drink and fight more and more, the drama kicked into high gear, and everything unravelled… they finally broke up when I was 11 and they eventually lost pretty much all of their money.

That’s another story, however.

Right now, I’m remembering the good years. I’m particularly grateful for the fact that up to about the age of 8 or 9 (before my parents’ drinking started to get out of control) I had a really great childhood.

A lot of people don’t get that. I think it gave me a solid foundation, a base of resilience, which helped me survive the trials and tests that were yet to come.

I sincerely thank both of my parents for giving me that. Such a precious gift.

My parents did their best. They had their own demons to battle, sure, which did seem to get the better of them after those idyllic early years… and being part of that unravelling was tragic and painful for all of us… but I know that they only ever wanted to give us kids a good life, and to that end they did their very best.

I’m so grateful for that.

What are the gifts, or even lessons, of your childhood that you’re grateful for today? And as always, let me know in the comments if this post has helped you in any way…