How to Bust the Hard Work Myth - The Abundance Code

How to Bust the Hard Work Myth 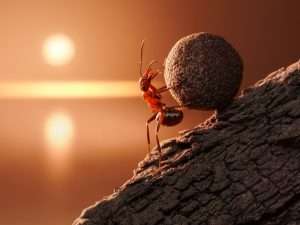 “You have to work hard for your money.”

We’ve all heard this countless times. This belief is very prevalent in our society and it applies to both women and men. AND, let me just shout out to the women who are reading this: for women, this phrase comes with an additional, unspoken layer of belief that we must “work even HARDER.”

Ladies, I hear you!

Indeed, there’s plenty of evidence to indicate that you have to work even harder to succeed as a woman. All around the world (except in maybe a few Scandinavian countries) there’s a glaring gender pay gap. Women do, statistically, tend to earn less than men. So the knee-jerk reaction for many women is to go to all out to be not just as good as, but better than, men in order to keep up.

(Note: if this is just a belief, a myth, then why is it statistically validated? I would say that it’s simply because it’s such a common belief! We make the things that we believe real. When society collectively believes that women’s work is worth less than men’s, then that’s the outcome we see. We see what we believe. The great news is that we can change our personal beliefs and that changes our personal experience… and if enough people do that then we can also change our collective experience.)

I definitely experienced it in my own career while working in the male-dominated funds management industry… because that was what I used to believe too.

Not only did I feel that I had to be more competent than my male counterparts, I felt that I had no choice but to put up with some misogynistic behavior. My response to that was to grow a thick skin, get on with being tougher, better, smarter… and I even became more masculine in my own behavior and energy as a protection mechanism to avoid being objectified. It got to the point where I pretty much stopped wearing skirts for a couple of years!

That was my response: Go Butch. Doing so was really not very affirming of my feminine power, and it just didn’t feel like me. It was unsustainable, and I experienced a pendulum swing back-lash later. I ended up resigning from that job, starting my own business with my business partner, and therein followed a period of a couple of years where you basically couldn’t get me out of a skirt… and some of my skirts were even pink… with lace bits.

The other response I see women having is where they feel like they’re supposed to be some kind of super-woman who can do everything, and fulfill all of their myriad roles flawlessly – daughter, mother, spouse, friend. And then on top of all that also be some kind of ‘Business Barbie’ (a term that a friend of mine coined) or a ‘Yummy Mummy’ creature… with just the right look, hair and not-too-strong opinions.

Trying to ‘win’ that game (with it’s underlying framework of constant comparison and competition) can be exhausting and soul-destroying.

(I wrote a previous blog post about this called “Don’t Compare Your Backstage to Everyone Else’s Front of Stage”, you can read that here:  https://theabundancecode.com/blog/dont-compare-back-stage/ )

The most important thing, when you’re seeking to break the competitive cycle of having to work HARD for every penny you get, is to let go of the myth that is driving you to work so hard in the first place.

Nothing, if you love what you do…

AND yet, what if it were fully possible to be successful and to attract wealth without the daily grind of hard work? What if you could access a life of freedom, choice and abundance without working yourself into the ground to make it happen?

Would you want that?

I’m guessing you would. And, I know that the only thing that’s stopping you from having it, is that you don’t really believe it’s possible.

Well, I believe it’s possible. I want you to believe it too…

Why do we have to justify our prosperity by limiting it to the kind that comes from hard (or HARDER) work? The notion that we do have to, is a conditioned response. A mental trap. A myth.

How do I know this?

Well, let me shed some light on how it can be possible to make money WITHOUT working hard for it. One of the best ways to do that is by using LEVERAGE. To leverage both your money and your time.

There are lots of ways to leverage time and money.

How to Leverage Your Money

One simple example of leveraging your money is by investing for a positive return, and then reinvesting the proceeds, so that your returns begin to compound.

A simple math experiment will illustrate this point.

BUT if you reinvested the interest income each year, so that the second year I paid you 10 percent interest on $110,000 (which is your original $100,000 investment capital plus the $10,000 in interest from the previous year that you added to the pot)… and you reinvested like this every year… then after 25 years your total capital would be $1,083,471, and you would have 3.1 times more capital in the end than if you hadn’t reinvested.

It’s said that Einstein called compounding returns the “eighth wonder of the world” because it allows you access exponential growth, and that’s a very powerful way to create leverage for your money.

How to Leverage Your Time

So how about leveraging your time?

A great way to leverage your time is where you do something once that pays you an income over and over again.

For example, a recording artist might record a song that ends up making money for them. The effort to do the recording was a one-off thing but the royalties can keep on rolling in long after with no additional effort. Elvis, for example, made more money after he died (from royalties) than he did when he was alive! So let’s say you develop a product, like an e-book, or an online course, or maybe even a piece of art. So long as you can figure out a way to sell it over and over again, then you are leveraging the time you spent on creating that product in the first place.

Another way to leverage your time, is to have other people work for you in a business.

I call all of this working smarter, not harder.

Sure, leveraging time and money by investing, or creating a product that pays you over and over again, or running a business all requires some know-how and some amount of starting capital. But it’s often not as hard as you think. And (especially with compounding) more important than the amount of capital you have to start with, is the fact that you start.

Years ago when I worked in the funds management industry, there was a great advertising slogan used by a merchant bank that summed this idea up. It was: “You don’t have to be wealthy to invest, but you do have to invest to be wealthy.”

Before you embark on any of these practical leveraging steps though… on a psychological level it’s REALLY important that you align your deeply-rooted beliefs around the connection between your self-worth, money and success, with your goals. This inner work is a vital step that many people skip, at their own peril.

I’ve seen it over and over again: skipping this step will often lead to you subconsciously sabotage your own best efforts to leverage, because at some deep level you don’t believe that you can make money without working hard for it.

Whatever you believe on a subconscious level, becomes your experience.

How do you do that?

Changing your limiting beliefs is a specific process – not a difficult process, actually, but one that is entirely vital to your success – which I step you through in my book The Abundance Code: How to Bust the 7 Money Myths for a Rich Life Now. You can get it now on Amazon Kindle for under $8 here:

I put all of my many years of experience and knowledge about how to overcome your subconscious money blocks into this book. It doesn’t cost much to get it (about the cost of 2 cups of coffee)… AND I know that it really helps people to transform their money story for good. Here’s an example.

“I would like to say what a profound shift in thinking your book ‘The Abundance Code’ has given me. I’ve been on the personal growth trail for a long time & since the birth of my son almost 2 years ago I’ve really amped it up, trying to get out of this poverty thinking, single-Motherhood pit.

I’ve been doing a lot of inner work but it wasn’t until I read your book that I really began to FEEL how these money myths have truly affected me & my ability to bring in, save & spend money well.”— Kimberly

Once you’ve dealt with your limiting subconscious programs around money, and you’re ready to move on to the practical aspects of growing your wealth by reducing your debt, leveraging your money through investing and maybe also leveraging your time… then I highly recommend checking out my good friend Ann Wilson’s material.

She’s also a Hay House author, speaker and blogger, who wrote and book called The Wealth Chef. Check her out at www.thewealthchef.com

As always, let me know in the comments if this post helped you in any way…