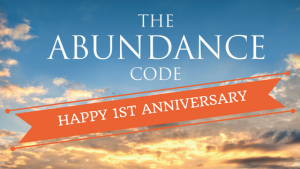 It’s now been ONE YEAR since we launched The Abundance Code film with a world-wide free online screening from 21-30 June, 2016.

WOW! I can hardly believe it’s been a whole year!

Since then, we’ve held another free screening just for our wonderful tribe of Abundance Coders in December, then the film was launched on FMTV.com (the most amazing mindful documentary platform in the world) in February and March 2017, AND it was featured in the world’s largest free online summit event, the Hay House World Summit, in May 2017.

Today I would like to give you an anniversary gift, a token of my appreciation for being part of this great Abundance Code tribe.

We’ve put together an eBook called “The Next Steps to Creating Abundance” which contains a collection of my blog posts on that topic. You can register for YOUR copy of that eBook here

How The Abundance Code Film is Affecting People’s Lives

Feedback shows us that the film has an amazing IMMEDIATE impact on people as soon as they watch it – it causes a profound paradigm shift for many people away from the mental prison of Scarcity and towards the freedom of Abundance. That’s something we’ve seen over and over again in the thousands of comments that The Abundance Code film has received.

What I’m even more interested in though… is how the paradigm shift that the film sparks continues to affect people’s lives over a time period of several months, and now, even a whole year.

I got an inkling of this long-term impact when my friend Savannah said to me recently: “So, I was chatting with a Facebook friend of mine that I haven’t talked to in a long time and I asked her how her life is going. She said ‘You know what? My life is amazing. Like, every area of my life is better – my relationships, my career, money, my happiness level – everything. I can trace the big shift back to when I watched that film you shared with me, The Abundance Code.’”

I was SO over the moon to hear this! It echoes what so many other people have been saying in the emails they send us. I’d like to share a few of those with you now, for inspiration…

“The film was a turning point for me when yet again I was facing the same wall that made me feel like a dead end. I was over it and knew that there had to be some way out and not repeat the process. That’s when the film came across my emails.

Since purchasing the whole pack I’ve viewed the film a few times and continuously watch the other mini videos. Always pick something up I didn’t the first time. That has since led me to pay better attention to my visualisations, gratitude and when trying to manifest, that my emotions a little lighter rather than heavy.

Very grateful that you guys put The Abundance Code/pack on offer. It has the potential to assist many with positive changes and I’ll be one of them.” – Anastasia

“I’ve just paid out my credit card. One of many. I’m so happy I can close it down and am so grateful I have 3 jobs so I can pay my cards out.” – Rosalie

“Dear Julie Ann, From the Other side of the pacífico in México, Marcela writes to you to thank you for the marvelous work you do.

Since I met you in the Hay Summit, abundance flows. In short, I sold one apartment without promoting it, the customer just appeared, easily, it solved the bank loan situation that I was carrying. Previously I had sold my car easily, safe and fast. I bought a new brand car that was necessary to go to work. I paid the full loan in three months with the sale money of the apartment. I was surprised… Everything in just three months.

These two actions will allow me to retire in February 2017 to enjoy more. I now believe, after reflections with your letters, that I am enough, that there is plenty of everything for all of us. That things don’t need to be like the system has imposed us, as mentioned in the film. This idea had been somewhere in my mind since I was 13, and I kept it in secret because I was considered a rebel. When I saw the movies, I thought, well I am not so crazy, there are other crazy ones haha.

Your lovely short letters is what I like most. I reject those long, publicity videos from other people speaking about abundance very superficial, in my feeling. Your messages go immediately sharp to the point. I love them and even read them late at night. I don’t want to miss any, sure that will change my mentality in the way I need it. Love” – Marcela

“Thanks so much for all the wonderful positivity you’ve sent my way this year. I have really needed it. Your hard work and generosity, is wonderfully inspiring! All the best” – Lily

“Thank you for sharing your light with me. Bless you. I’m taking baby steps towards believing more in me and creating the life I want. Your Abundance Code film certainly helped. Personally I find your beautiful energy via your blogs really helpful.” – Kim

Wow, wow, wow! You have no idea how much this kind of feedback warms my heart!

I want to hear more! Please write in and tell me how you feel The Abundance Code has helped you in your life! Send your email to theteam@theabundancecode.com