Feel the Fear and Do it Anyway (with a Difference)... - The Abundance Code

Feel the Fear and Do it Anyway (with a Difference)… 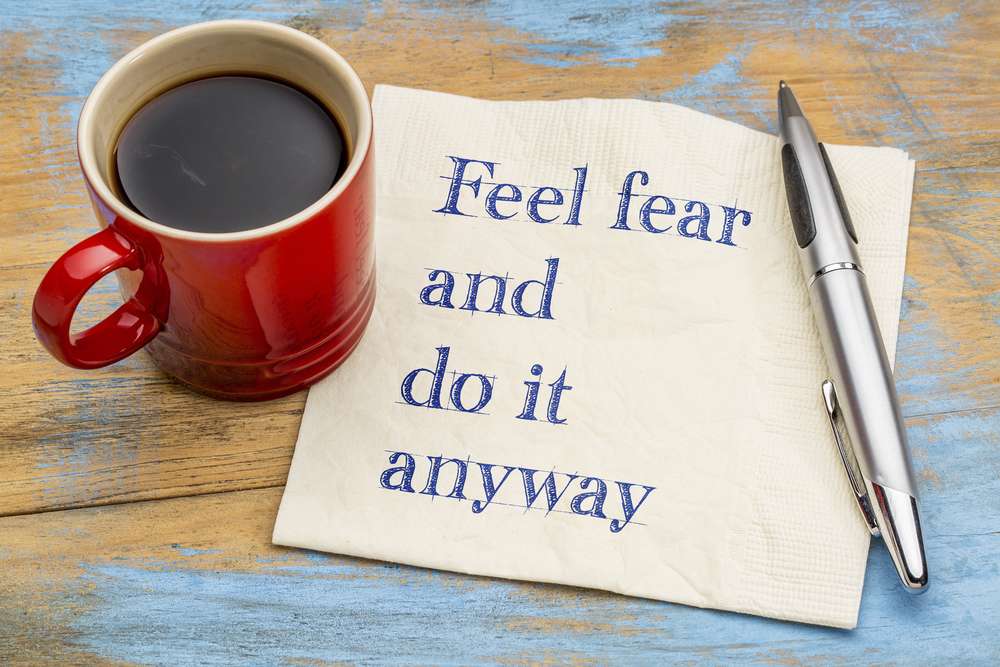 Recently I was in Budapest, Hungary for the launch of my book The Abundance Code: How to Bust the 7 Money Myths in Hungarian.

At the launch event being held by the publisher, I was scheduled to speak in front of an audience of 610 Hungarians for over an hour. My talk was to be translated into Hungarian from English simultaneously, with the audience members wearing translation headsets.

I was nervous about the talk. Not just because it was being translated and I wasn’t sure how that was going to go… or because it was a big audience… but also because I had decided to open up and share some of the more traumatic parts of my journey so far. Things that I find it way easier to write about than to speak about.

Throwing up Into a Bucket

On the day before the main event, my body was so tense and wound up about it that I ended up throwing up several times that day. I knew it was just nerves, and I asked my body to please get through whatever it needed to process before the talk started, because I really didn’t want to have to run off stage and throw up into a bucket in the middle of my speech!

I knew I needed to feel the fear… and not deny it. So I honoured my body’s need to work through it physically. But I also worked with my body to get the processing over with well before I needed to step on stage. Because despite feeling the fear, I was going to do this thing anyway.

By the day of the talk I was less shaky. By that night I was able to step on stage confidently and it all went well.

I got some amazing feedback afterwards. While I was signing copies of my book, so many people told me that my open sharing during the talk had really touched their hearts and inspired them.

So why am I telling you about this? Not just so that I could spout the inspo quote “Feel the Fear and Do it Anyway!” (Though I do like that saying)…

The real reason I’m sharing this story is because I feel that sometimes people are ashamed to admit that certain things scare the crap out of them.

And also, because I know a lot of people are not trained in how to sit with and allow their fears to be present in the body, and process them in a useful way.

We tend to deny such feelings by distracting ourselves, numbing out or covering over the feelings a quickly as possible. We label them as “bad” or “negative”. Because, let’s face it, they are really uncomfortable. I mean, who wants to be feeling so emotionally stirred up that they are physically throwing up into a bucket? It’s not my favourite way to spend a day… but that doesn’t mean that what’s happening in my body with these feelings is actually bad.

If I’m in the process of working through an old and deep-seated emotional blockage, and if processing that blockage in a useful way means that I’ll be able to burn through a limitation that I may have struggled with my entire life… is that really a bad thing?

Lots of things scare the crap out of me. I’m actually someone who struggles with anxiety, and I’ve had to learn how to manage it over the years. My experience, for what it’s worth, is that when I stop being afraid of my fears and just allow them to be present and do their thing in my physical body (without labelling that thing as “bad” even though it might be unpleasant) then the fear works itself out and passes.

When I try to deny it, cover it over, numb it out, it just gets stronger. So even though processing my anxiety and fear when it pops up can be unpleasant, I’ve learned that it’s preferable to go for the quick burn than to suffer the long slow escalation of fear and anxiety that eventually brings me to my knees anyway.

I want to share some resources that I’ve found useful for facilitating and speeding this ‘burn’ process. I’m not affiliated with any of these products, they’re just things I’ve used in the past and found to be really helpful.

The easiest technique I like is tapping, which I highly recommend as a practice. I learned the original style of tapping called Thought Field Therapy (TFT) directly from the creator of tapping as a healing modality Dr Roger Callahan, before he died. You can check it out here.

I don’t practice the other well-known style of tapping called Emotional Freedom Techniques (EFT), but I know people who do and they get good results from that style too.

Theta Healing is another healing technique I’ve learned and used for all kinds of emotional blocks including anxiety. It’s pretty amazing, especially for belief blockages. Check it out here.

These days I mostly use a ninja technique called Dynamic Spin Release, which I learned from NLP Masters Tim and Kris Hallbom. I’ve been using Dynamic Spin Release on myself for years, and with my coaching clients for the past 18 months, with incredible results. I’m now qualifying to teach it.

I’m a huge fan of Tim and Kris Hallbom’s work. (You can read an article about Dynamic Spin Release written by Kris Hallbom here.)

One of the reasons I love Dynamic Spin Release is that it’s a process that not only clears emotional blocks and re-programs limiting subconscious beliefs super fast, it also gives access to valuable subconscious imagery and insights.

While I really do like the saying “feel the fear and do it anyway” I think it’s great to learn techniques that can process the fear in a useful way. A way that facilitates burning through it quickly, that also provides valuable insights and that clears blockages in a permanent way.

I’ve provided some resources I’ve found useful, but there are many other ways to process difficult feelings in a useful way. Depending on how intense or debilitating your feelings are, you may need professional help to do it. Don’t be afraid of asking for that help. Gather your courage to allow it.

It’s so worthwhile to actively process your feelings rather than allowing them to overwhelm you, limit you or control you.

So… Maybe I would tweak the saying a little bit to: “Process the fear, and do it anyway” because I feel that’s a better way to think about it.

It’s not quite as catchy though, is it? Haha.